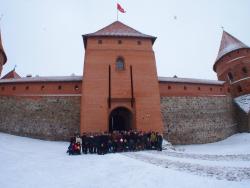 The last event of Orientation Week was the day-long trip to the old capital of Lithuania – small, but beautiful town of Trakai. It is famous not only because of the medieval castle situated in the island of the Galvė’s lake, but also Trakai is home to two ethnical minorities – karaites and tatars, who are famous for their authentic traditions and historical relations with Lithuanians.

After gathering in the train station of Vilnius on the sunny Sunday morning, huge group of Erasmus students took the train going to Trakai. They were handed maps of the town with the schedules of trains and busses going back to Vilnius so that they would not get lost and were able to buy tickets for the guided tour in Trakai castle. Having arrived to the snowy destination point, Erasmus students did not hesitate to jump on the first frozen lake they saw and take bunch of pictures and play with snow (or ice). Then everyone enjoyed the beautiful nature while going up to the castle by the path in between frozen lakes.

Later, students were split into two groups for the guided tour of the castle. The guide briefly introduced foreigners to the history of Lithuania, the phases of building and re-building of Trakai castle, medieval traditions, karaites and tatars lifestyle and religion, etc. Students were able to walk around the castle chambers, see the medieval coins (or make one themselves), furniture and clothing, also read some facts about Lithuania and Trakai and even experience how old torture instruments were working. After the tour everyone was able to take photos in front of the castle and then went to try the traditional karaites food of Trakai – kibinai.

Even though the weather was not the best for such a trip, an opportunity to walk on ice, throw snowballs and experience the life of people in medieval ages by walking around the castle and hearing interesting stories, seemed to have left everyone very content with the trip. We are sure this was not the last time they have visited the old capital of Lithuania. 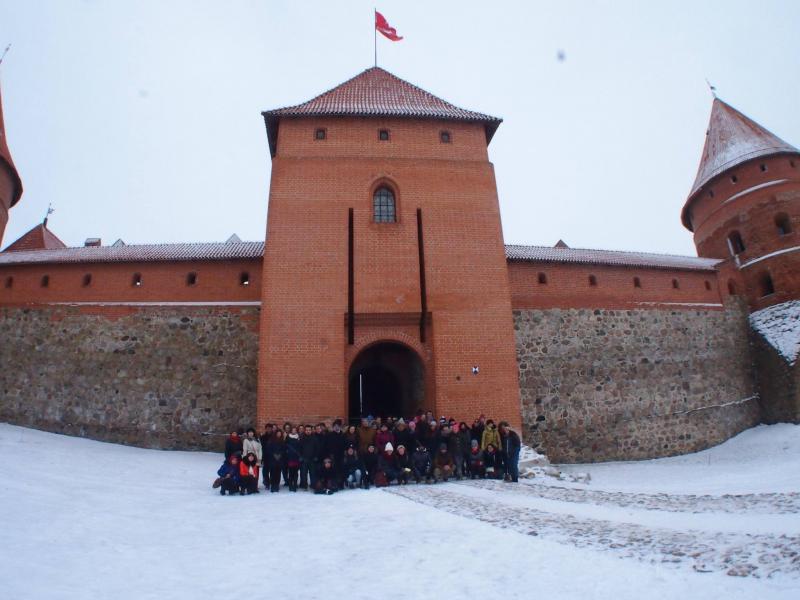